Journalist reporting on water and climate change in the West

Hoover Dam has held Colorado River water since 1935. But the country's largest reservoir is dropping, approaching its lowest levels since it was filled.
The Arizona Republic Link to Story

The warming climate is intensifying drought, contributing to fires and drying out the river's headwaters, sending consequences cascading downstream.
The Arizona Republic Link to Story

As corn crops wither, the Hopi fear for their way of life

On a barren patch of sandy ground, Beatrice Norton stood beside her son examining the rows of corn. A few of the biggest cornstalks grew waist-high. Most of the plants were knee-high or smaller. Some had shriveled, failing to produce any corn. This year's harvest brought sadness and disappointment as they picked through the field their family has farmed for generations.
The Arizona Republic Link to Story

As springs decline, the Hopi blame pumping by coal industry

At the base of a sandstone mesa, the ground descends in a series of stone terraces and steps, forming an oval-shaped ceremonial gathering place with flat rocks arranged around a central pit. At the bottom, a pool of water shimmers in the sun. This natural spring, called Toreva Spring, is a sacred place for Hopi people.
The Arizona Republic Link to Story

The Hopi Tribe pushes for solutions in long struggle for water

At the end of a dusty road, beside two water tanks in the desert shrubs, a windmill spins in the breeze. From a spigot, water flows through a blue hose and gushes into a bucket. When the water reaches the brim, Kayla Johnson heaves the bucket into the back of her family’s car. Her younger brother, Terron, holds the hose and keeps the stream running into a 5-gallon jug.
The Arizona Republic Link to Story

Megafarms are draining the water beneath rural Arizona

Vast expanses of lush green fields are multiplying in the Arizona desert, forming agricultural empires nourished with billions of gallons of groundwater in the otherwise parched landscape. Arizona’s groundwater levels are plummeting in many areas. The problem is especially severe in unregulated rural areas where there are no limits on pumping.
The Arizona Republic Link to Story

Wells threaten to dry up the San Pedro River

A flash of red streaked through the trees: a vermilion flycatcher. The brightly colored bird chirped and trilled, adding to a chorus that rang from the towering trees. Beneath the shady canopy of cottonwoods and willows, the San Pedro River flowed shin-deep, gurgling through smooth rocks. This green artery, which snakes north from the Mexican border into southeastern Arizona, nourishes an astoundingly rich variety of life, including more than 350 species of birds, many of which stop here during migration.
The Arizona Republic Link to Story

On sunbaked farmlands where alfalfa and corn grow alongside pistachio orchards and grapevines, pumps hum as wells draw water from underground and send it flowing to fields. The agriculture business around Willcox depends entirely on groundwater. And groundwater here, like most other rural areas across Arizona, remains entirely unregulated.
The Arizona Republic Link to Story

How climate change is making wildfires worse in the West

As flames tore through California’s Santa Cruz Mountains, Craig Clements drove toward the fire in a specialized radar-equipped Ford pickup, watching the plume of smoke billowing from the forest.
The Arizona Republic Link to Story

The West has been stricken by a dry spell so severe that it ranks among the biggest "megadroughts" of the past 1,200 years. But scientists have found that unlike the decades-long droughts of centuries ago, this one has been supercharged by humanity's heating of the planet.
The Arizona Republic Link to Story

The Colorado River once flowed with so much water that steamboats sailed on its wide, meandering stretches near the U.S. -Mexico border. When the environmentalist Aldo Leopold paddled the river’s delta in Mexico nearly a century ago, he was filled with awe at the sight of “a hundred green lagoons.”.
The Arizona Republic Link to Story

Lining up for water, Navajo people push for solutions

The line forms at the water spigot before dawn. In Chevrolets, Fords and Toyotas, men and women of all ages pull up, the beds of their pickups holding plastic tanks and barrels. Each day, all day long, people wait to take the white hose and let the water run into their tanks. It’s the only reliable source of clean drinking water they can count on in this part of the Navajo Nation, and they come from miles around to fill up.
The Arizona Republic Link to Story
View More Stories

Ian James is a reporter who covers water in California and the West for the Los Angeles Times. He has written extensively about the consequences of groundwater depletion and how climate change is shrinking the flow of the Colorado River. Some of his award-winning projects have examined the effects of water overexploitation in the western U.S. and in countries from India to Peru. He has also reported on costly struggles to curb industrial pollution and clean up toxic contamination in drinking water. His reporting on the climate crisis has included stories about crop failures, worsening wildfires and the degradation of desert ecosystems. He has won awards including the National Headliner Award for environmental writing, the New America Award, a Science in Society Journalism Award, an American Meteorological Society science writing award and the Knight-Risser Prize for Western Environmental Journalism. He previously worked for The Arizona Republic, The Desert Sun and The Associated Press.  As the AP’s bureau chief in Venezuela, he covered Hugo Chavez’s presidency. He also worked for the AP as a correspondent in the Caribbean. He is the author of the book "Ninety Miles: Cuban Journeys in the Age of Castro," which focuses on the lives of three Cubans during Fidel Castro’s rule. He has appeared on NPR's Morning Edition, PBS NewsHour and other television and radio programs. 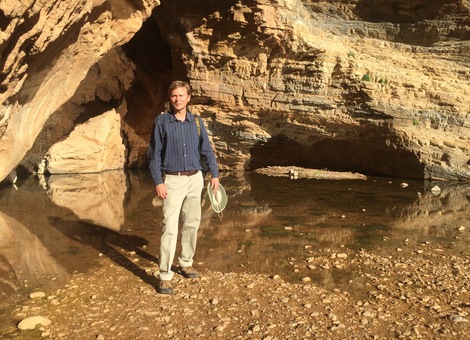